Proposals for Suffolk and Norfolk devolution look set to bring more than £1 billion of funding to the region, and give businesses a greater say over local issues

Businesses across Norfolk and Suffolk are being urged to give their backing to a devolution deal that will see the region take control of more than £1 billion of funding. The Norfolk and Suffolk Devolution Agreement, which is now open to public consultation, lays out proposals for the creation of a combined authority, with local councils across the two counties making collective decisions on regional issues. It will also see the introduction of an elected mayor for Norfolk and Suffolk.

The deal already has the support of Suffolk and Norfolk County Councils, the New Anglia Local Enterprise Partnership (LEP) for Norfolk and Suffolk, and a number of other local authorities. Should it be endorsed by central government, it will see the combined authority receive £750 million over the next 30 years, to be invested in infrastructure, economic growth and jobs. A further £130 million will be allocated for investment in affordable housing, while a £225 million transport budget and £20 million skills budget will also be brought under local control. It is thought that the proposed deal will see the regional economy grow from £14 billion to £43 billion by 2026, and lead to the creation of 95,000 jobs. 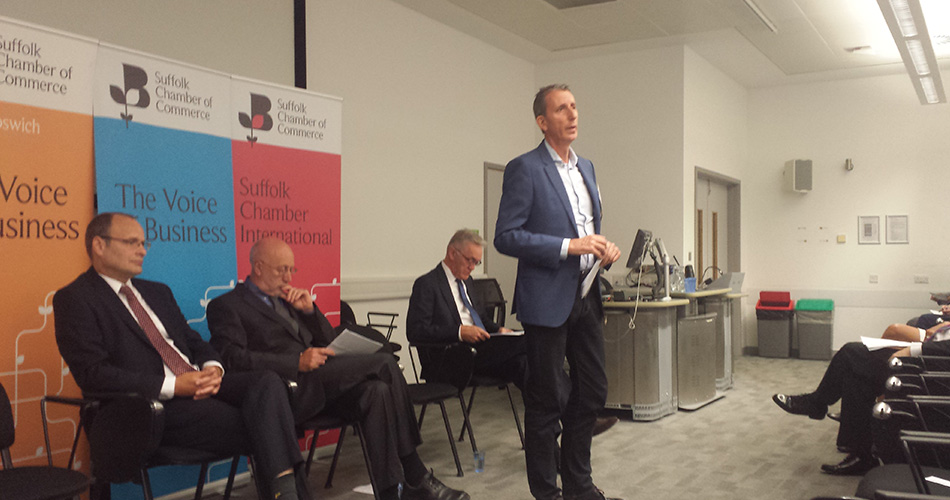 At an event hosted by Suffolk Chamber of Commerce and New Anglia LEP, Suffolk-based businesses (including Fleximize) heard how the deal could turn the region into an economic powerhouse to be reckoned with. “We hear about the Northern Powerhouse; we hear about the Midlands Engine. What about East Anglia?” said Andy Wood, chief executive of Adnams, the brewing and pub company, and independent chair of the East Anglia Devolution Leaders Group. “It’s the nation’s breadbasket. It’s got great technology companies, it’s got great financial services companies, it’s got food and drink companies coming out of its ears.”

Dr Peter Funnell, immediate past president of Suffolk Chamber of Commerce, said the prospect of devolution is something that businesses can’t afford to ignore. “Local decision-making about how public money is spent should mean that local businesses have more to say about the policies and priorities that are right for business,” he explained. “This is a new opportunity to do things differently, and it’s one we should be grasping.”

Funnell called on businesses to show their support to the devolution deal, and said entrepreneurs can have a huge say in the future of Suffolk and Norfolk. “The business community has a part to play in shaping the focus of the elected mayor and the combined authority,” he added. “That focus should be on creating the conditions that facilitate and encourage our dynamic and entrepreneurial businesses as they look to grow and create wealth for all, and do so in ways that are socially responsible, build community capacity and are themselves sustainable.”

Fleximize joined other businesses in adding its signature to a letter being sent by Andy Wood to Sajid Javid, secretary of state for communities and local government, which outlines the case for Norfolk and Suffolk Devolution. The consultation runs until 23 August, so make sure you pay a visit to the East Anglia Devolution site to find out more about the plans and make your voice heard.