When the Conservatives won a majority in last year’s general election – defying every single poll in the process – political commentators went into meltdown. However, that result pales in comparison to the outcome of the EU referendum, which looks set to fundamentally transform the UK’s place in the world.

Despite most bookmakers predicting a remain vote, almost 52% of the British public voted for a Brexit, with English voters tipping the balance in favour of leaving the EU. While Scotland and Northern Ireland largely voted to stay in the EU, huge swathes of northern, central and south-west England, as well as Wales, decided that the UK was better off out of a political and economic union it first joined in 1975. 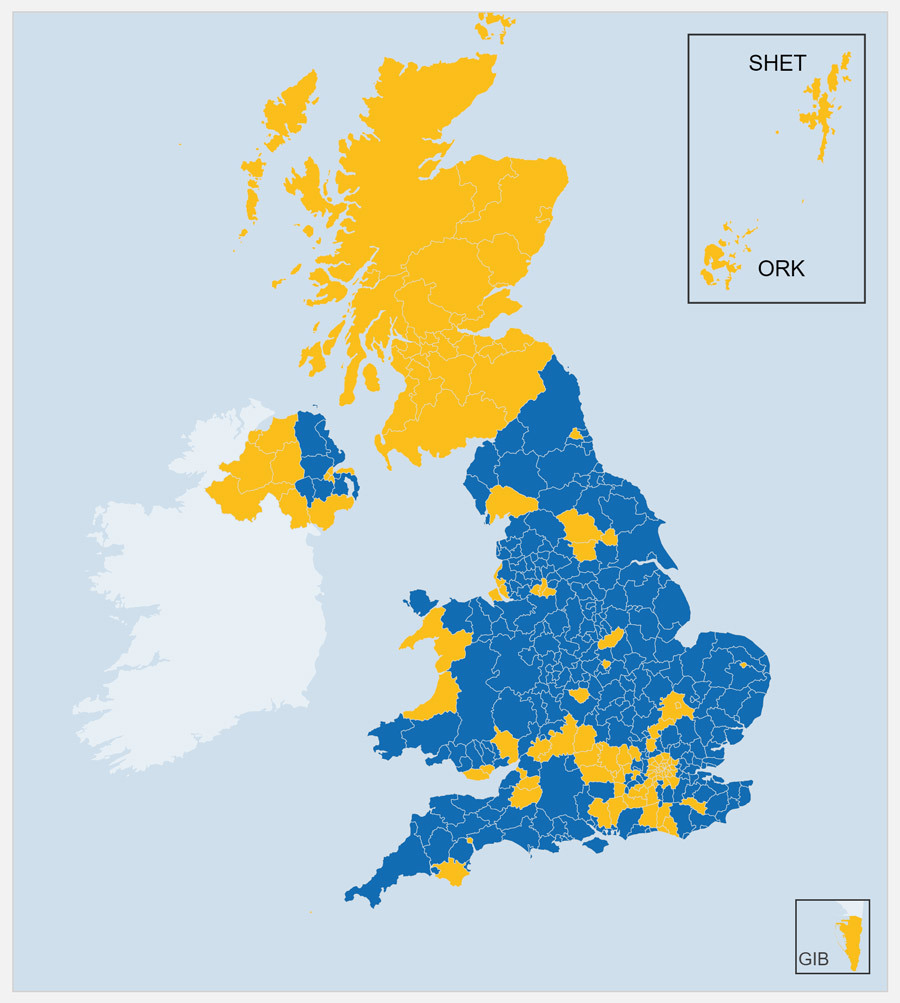 It remains to be seen what the outcome of the referendum will mean for Britain in the long-term, but the short-term economic and political fallout has been significant. The value of the sterling against the dollar collapsed to its lowest level since 1985, while the FTSE 100 index dropped by over 8% before starting to recover by mid-morning.

The result has also brought an abrupt end to David Cameron’s time as Prime Minister. Having initially called the referendum after pledging it in the Conservative manifesto, and following a renegotiation of the UK’s membership, Cameron announced his resignation in an impassioned speech on the steps of Number 10, saying a new leader will need to be in place by the start of the Conservative Party conference in October.

“I will do everything I can as Prime Minister to steady the ship over the coming weeks and months but I do not think it would be right for me to try to be the captain that steers our country to its next destination,” said Cameron. “This is not a decision I've taken lightly but I do believe it's in the national interest to have a period of stability and then the new leadership required.”

Commenting on the outcome of the referendum, Cameron added: “I fought this campaign in the only way I know how, which is to say directly and passionately what I think and feel - head, heart and soul.

“I held nothing back, I was absolutely clear about my belief that Britain is stronger, safer and better off inside the European Union and I made clear the referendum was about this and this alone - not the future of any single politician including myself.


“But the British people have made a very clear decision to take a different path and as such I think the country requires fresh leadership to take it in this direction.”

This is not a decision I've taken lightly but I do believe it's in the national interest to have a period of stability and then the new leadership required.

Meanwhile, Governor of the Bank of England Mark Carney said £250bn of additional funding had been made available “as a backstop and to support the functioning of markets.”

In an address this morning, Carney said: “A few months ago, the bank judged that the risks around the referendum were the most significant near-term domestic risks to financial stability. To mitigate them, the Bank has put in place extensive contingency plans and these plans begin with ensuring that the core of our financial system is well capitalised, is liquid and is strong.”

He added: “It will take some time for the United Kingdom to establish new relationships with Europe and the rest of the world […] but we are well prepared for this.”

The UK’s business community was also quick to react to the result, with many saying it’s time for both calm and clarity.

Carolyn Fairbairn, Director General of the CBI, said: "Many businesses will be concerned and need time to assess the implications. But they are used to dealing with challenge and change, and we should be confident they will adapt.”

She added: "The urgent priority now is to reassure the markets. We need strong and calm leadership from the Government, working with the Bank of England, to shore up confidence and stability in the economy. The choices we make over the coming months will affect generations to come. This is not a time for rushed decisions.”

Simon Walker, Director General of the Institute of Directors, called on the government to ensure British businesses are not left short of talent following the result. “One thing the Government must do immediately is to guarantee the right to remain of EU citizens currently in the UK,” said Walker. “Companies do not want to have to worry about losing valued staff."

The choices we make over the coming months will affect generations to come. This is not a time for rushed decisions Carolyn Fairbairn, CBI

In a blog on the Virgin website, Richard Branson also made his thoughts clear on the outcome of the referendum. “Leaving the European Union is a very sad decision that will do enormous damage to both Britain’s economy and Europe’s stability,” wrote Virgin’s founder. “This decision will create volatility and will threaten much of the good work delivered by the EU over the last 40 years.”

However, Branson added that the country now has to look forward and overcome the challenges that businesses face as a result of today’s result. “Now is not the time for further complaints and anger,” he added. “Now is the time to come together as a nation and heal the wounds created by the divisive tone and aggressive rhetoric that has dominated this campaign. The UK and its amazing, resilient people have weathered many storms – with determination, resolve and sense of what is right. Those qualities will be needed over the testing months and years to come.”

A petition to hold another referendum has already hit 100,000 signatures, which forces to the government to consider a debate on the issue in the House of Commons.

But the immediate concern of business owners, not to mention employees, is what a Brexit will mean for their companies. With that in mind, why not take a look at the guide we put together before the referendum on what a leave or remain vote could entail for businesses?