Far from being a threat, artificial intelligence presents a huge opportunity for businesses of all sizes

Not a day goes by without a headline decrying the loss of an entire industry to machines. Along with concerns about whether people will lose their livelihoods, there’s also a fear of losing control. It’s an anxiety that drives blockbuster sci-fi movies: what happens if and when the robots – that are expected to have, on average, an IQ higher than 99% of humans by 2030 – rebel?

But how seriously should we take claims that machines are poised to take millions of jobs? What if, rather than viewing them as the enemy, we thought about the rise of artificial intelligence (AI) and machine learning in a different way – as allowing us to do things better and more productively?

As big data continues to grow at an unprecedented rate, AI is the solution to help businesses mine this data for quality insight and clarity, and make real-time decisions to satisfy customers and further business objectives. By enabling humans to work faster and better than ever before, job roles will transform, empowering employees as decision-makers and strategists by automating menial tasks.

To understand this mutual relationship, it’s important to understand the history of AI and its early uses. In the 1990s, Gary Kasparov, the best human chess player in the world, developed a new variation of chess – advanced chess – where human and AI teams competed against one another. Today, these hybrid AI/human teams are capable of beating any individual human player in the world using the AI’s calculating probabilities to adjust the strategy accordingly.

As big data continues to grow at an unprecedented rate, AI is the solution to help businesses mine this data for quality insight and clarity, and make real-time decisions to satisfy customers and further business objectives.

DIFM (Do It For Me) services are a good example of this collaboration. Using a combination of technology for efficiency and humans for customer service, DIFM services take the time, resource and technical expertise out of complex tasks such as payments, accounting, and building and managing a website.

This enables businesses to continue with their priority tasks with the confidence that, if they want to be involved, they can call on dedicated human personnel for help – which most people prefer over digital communication. Indeed, while chatbots will play a vital role in customer service and support in the future, helping to expedite the process and give people solutions to their problems faster, they won’t eliminate human assistance. Instead, humans will lean on the technology to offer an even better customer experience.

The problem with demonising robots as job-stealers is that it promotes a fear of innovation and a false notion that technology is bad for the economy. In fact, if we look back at history, with the deployment of ATMs in the 1990s, this actually led to an increase in bank tellers because as the cost of operating branches reduced, banks opened new ones. 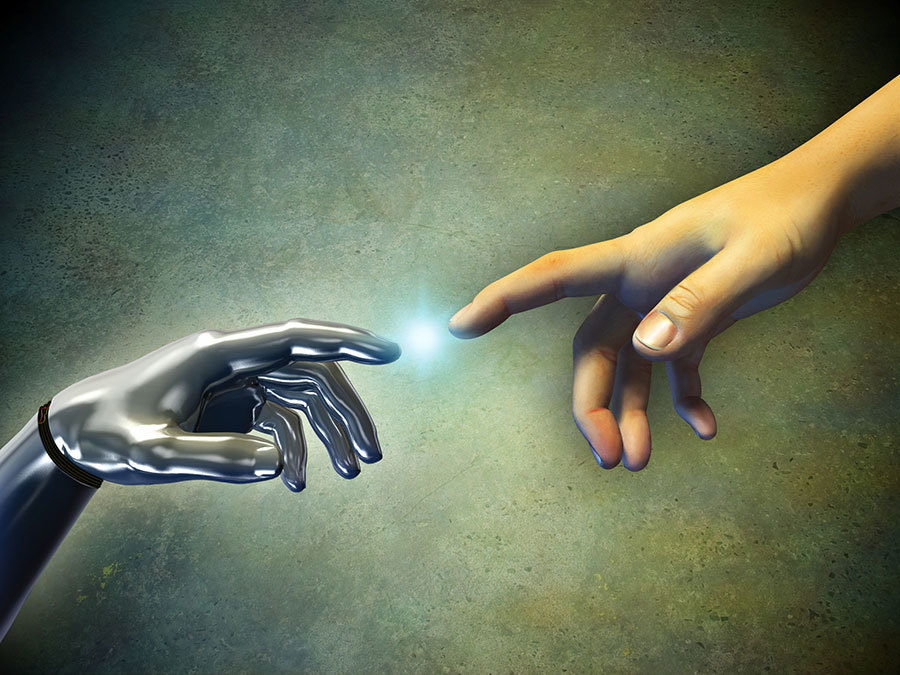 Indeed, in many cases, automation democratises the ability of workers at all levels to create value. And, despite the rapid growth of technology, a recent report by Gartner outlines that 89% of companies now believe the customer experience is the most important benchmark by which they are judged. This figure demonstrates the importance of humans in the workplace.

Although there’s no doubt AI will change the goalposts of traditional jobs, by using computer power to automate high-volume tasks such as data entry and email, there’s no replacement for human interaction – particularly, I’d argue, when purchasing big ticket items in verticals such as auto or finance.

Ultimately, in the long-term, excluding human personnel removes valuable feedback and customer service. While machines are better suited to sorting data, it’s humans that implement the technology and give it meaning. And in terms of fearing the rise of AI, let’s not forget that during the first Industrial Revolution, Luddites were terrified machines would take away their jobs. In fact, it only enhanced workers’ lives and increased productivity.

As Daniel Mahoney, head of economic research at the Centre for Policy Studies points out, for every 10% of jobs that are lost per year to automation, another 10% are created. Clearly it’s time we stopped fearing AI and started thinking of the huge potential of the human-machine partnership.