Most people in the UK have a home or office that can be found with relative ease. However, around four billion of the world’s inhabitants don’t enjoy the simple luxury of a registered, or reliable, address. As well as making life difficult for postmen – not to mention humanitarian workers and emergency services – it also prohibits many people from being able to vote, take out a loan or start their own business.

Until recently, nobody had found a workable solution to the world’s inefficient addressing system, but one company finally seems to have cracked it. Founded in 2013 by Chris Sheldrick and Jack Waley-Cohen, What3Words has managed to divide the world into 57 trillion 3 metre x 3 metre squares, with each square assigned a unique combination of three words. As a result, even people living in the most remote locations have now got their very own address.

Having raised $13.5 million to date, What3Words has already seen several logistics firms and national postal services adopt its addressing system, while talks are ongoing with some of the world’s largest e-commerce, transportation and travel firms. It has also demonstrated its positive impact on humanitarian efforts, with the Red Cross using it to coordinate a response to a recent typhoon in the Philippines. But where did it all begin for the company that looks set to transform the lives of billions? 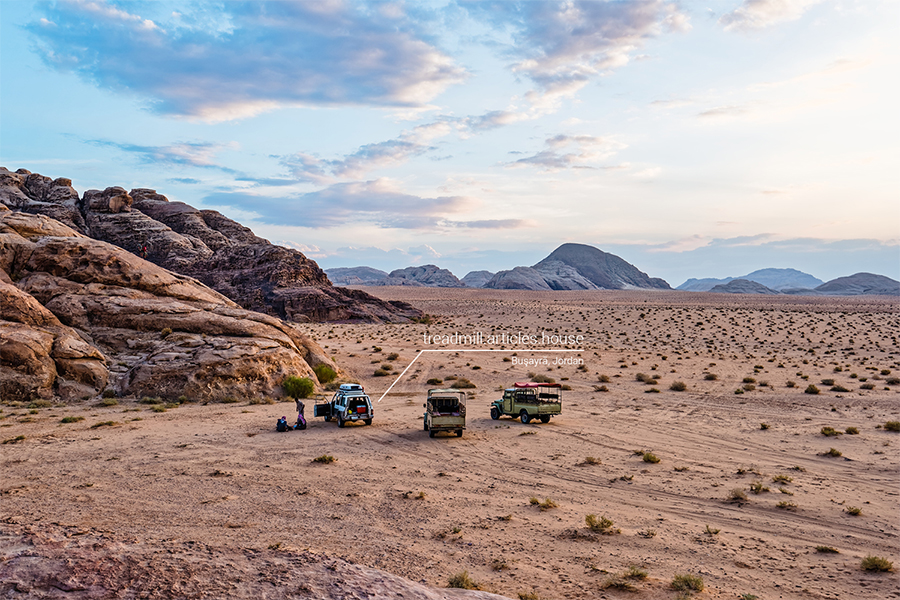 Once a talented musician, a serious hand injury forced What3Words’ CEO, Chris Sheldrick, to slightly rethink his career. And it was while organizing music events that he realised the limitations of the world’s addressing system. “Chris was just constantly frustrated by bad addressing,” says Giles Rhys Jones, chief marketing officer at What3Words. The locations that proved most troublesome were the larger venues that had a single postcode and numerous entrances. “People wouldn’t get to the right place, equipment wouldn’t turn up or band members would go missing,” adds Jones. “It was just really problematic.”

One solution was to use GPS coordinates, but when a driver in Rome mixed up two of the numbers and ended up at a location 50 miles away, Sheldrick resolved to find a better way. “It became apparent pretty quickly that humans aren’t engineered to remember 18-digit codes,” says Jones.

The idea for What3Words emerged after Mohan Ganesalingam, the company's head of research and development, suggested dividing the world into 3 metre x 3 metre squares, and Waley-Cohen, a former Countdown winner, proposed the use of memorable words to identify each square. The three of them set about building a system that assigned every single square its own combination of three memorable words. Any offensive words or homophones, such as ‘here’ and ‘hear’, were removed manually. “Getting the algorithm right was incredibly complex,” says Jones.

The subsequent translation of the platform into other languages has added another layer of complexity. “We’re launching Arabic next month, and that’s particularly challenging, not only because of the character set but also because you say things in a different tone,” Jones explains. What3Words also gathers shorter, more memorable words in countries that speak the specified language. Using the English version as an example, Jones says: “Here in London, you’ve got lots of short English words, but if you were out in the middle of the Sahara, they’d be much longer.”

The final piece of the What3Words puzzle is ensuring that similar sounding words are placed as far apart as possible, which avoids the sorts of problems that can arise when using GPS coordinates. “If I make an error with GPS coordinates, and I mix up two of the numbers, I still end up on a hillside in Rome. I’m just 20 minutes north of Rome instead of 20 minutes south. But I don’t realize that,” says Jones. “With our system, if you make just a tiny error, it says, ‘Hold on a sec, that’s in Australia. This one is five minutes away. I think you mean this one.’” He gives the examples of table.chair.lamp and table.chair.damp, which are located in Connecticut and New South Wales respectively. 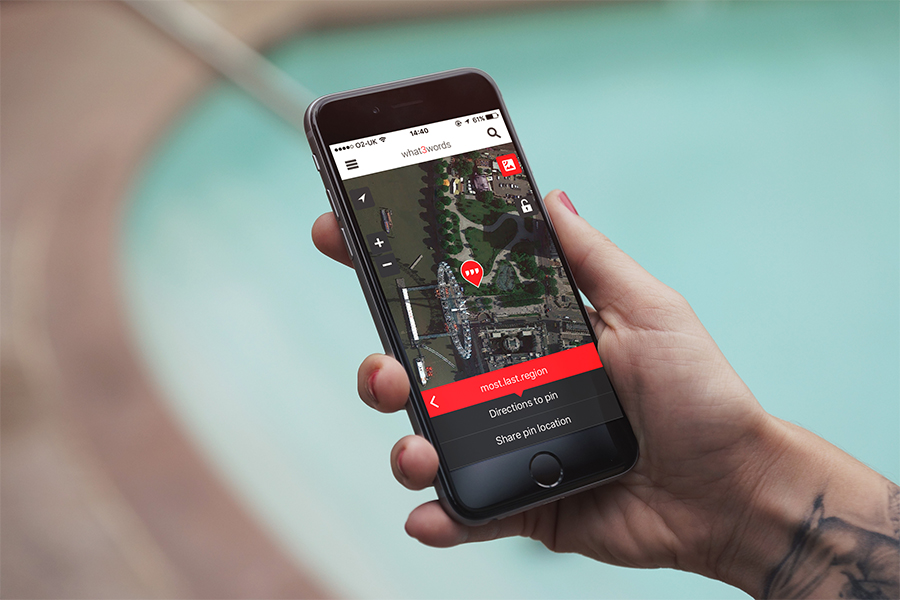 Once the tech was ready, What3Words started to approach companies that it believed would benefit from its addressing system. And it’s already amassed a decent number of partners. “We are working with businesses that can either improve their customer experience or save themselves a lot of money,” says Jones. “All the time, we see businesses just putting a three-word address on their ‘Contact Us’ pages, because it saves their customers five minutes of driving around, making a phone call and arriving pissed off because they couldn’t find you.”

The company’s monetization strategy is incredibly simple: after licensing its software to companies, it just levies a small charge every time somebody uses a three-word address. “The cost is incredibly low because our strategy is to become a global standard,” says Jones. “We’ll be accepted on iPhones, search engines and social networks. And to do that, we need to price it accordingly.” But rather then charging a flat fee, What3Words tailors its prices to suit the size, and type, of company. This makes it affordable for smaller businesses, while the cost is almost negligible for humanitarian projects. “It’s important to strike a balance between doing good and doing business,” says Jones.

As well as its work with the Red Cross, What3Words is also giving addresses to the millions of people living in Brazil’s favelas. And earlier this year, it struck a partnership with the Mongol Post, Mongolia’s state-owned postal service, which has accepted What3Words as the country’s national addressing system. The fulfilment of deliveries in Mongolia, not to mention countries in the developed world, has been eased by the integration of What3Words into Navmii, the mobile GPS app. “Navmii is being used by couriers to deliver parcels and packages to three-word addresses,” says Jones. “It’s a great app, and it works offline as well, so you don’t need any data to use it.”

It’s important to strike a balance between doing good and doing business.

Integration into sat-nav systems is certainly a compelling use case for What3Words. And with the company also exploring the use of voice technology, it’s opened discussions with several car manufacturers. “If I get into my car and say ‘take me to Lonsdale Road’, there are eight Lonsdale Roads within ten miles of where I’m sitting right now,” says Jones. “But if I get into a car and say ‘take me to index.home.raft’, there is only one of those on the planet, so it knows exactly where to go. And it also knows that’s the entrance to our head office, rather than the middle of the building.”

One car company has already used What3Words to support its marketing efforts. “Audi found its tagline, ‘vorsprung durch technik’, in the jungle in Brazil,” says Jones. “They took one of their Q7 cars on a road trip around the country and recorded the three-word address of every place they stopped until they eventually got to vorsprung.durch.technik. They put it in their magazine and made a film about it, which was great fun, but it also goes to show that the whole planet is addressed.”

The opportunities and use cases presented by What3Words are plentiful to say the least. And while the company has envisaged most of them, it still sees it being used in unexpected ways. “Steven Spielberg was shooting his new film in Birmingham recently, and someone sent me a photograph of his shot list,” says Jones. “Against every single scene, there was a three-word address of where the crew and the cast needed to congregate. That was pretty surprising.”

The next step for What3Words is convincing the big players in the logistics, e-commerce, transport and travel spaces about the power of its addressing system. “There are some big companies that could use simpler and better addressing to improve their business,” says Jones. “That might be an Uber, an Amazon, a Trip Advisor, a DHL or a UPS. The applications are pretty broad.” And following its integration into DuckDuckGo, a default search engine for iOS, it’s setting its sights even higher on that front. “It would be fantastic for Google Maps to accept a three-word address,” adds Jones.

Long-term, the goal is to be recognized by national governments, not least in places that currently suffer from poor, or non-existent, addressing. “One of the key issues is that without an address, you’re legally invisible,” says Jones. “It means that you can’t get aid, you can’t vote, you can’t set up a business, and many other things.”

Therefore, by introducing itself to politicians, What3Words could have an impact that extends far beyond getting a band to an arena on time. “All of a sudden you bring around four billion people into the global economy,” says Jones. “That’s not an insignificant number.”