Eight Photographs that Changed the World

On World Photography Day, we threw the spotlight on the photos that stopped people in their tracks

It's said a picture paints a thousand words. If that were true, journalists would be out of a job. However, it wouldn't be far off the mark to say that some pictures paint far more than a thousand words.

On World Photography Day, we thought it would be fitting to showcase those photos that more or less speak for themselves. While some of these images might make for difficult viewing, we hope you'll agree that they're testament to the power of photography, and the skill of the individuals behind the camera.

It's the photo that came to symbolize the political and social unrest in China during the late 1980s, and arguably one of the most iconic snaps of all time. Associated Press photographer Jeff Widener captured the moment that an unidentified Chinese citizen dared to defy the country's military on the day of the infamous Tiananmen Square Massacre in Beijing. The image was used by media outlets across the world as part of their coverage of the events in the Chinese capital, but the story behind the photo is almost as remarkable as the one it depicted. 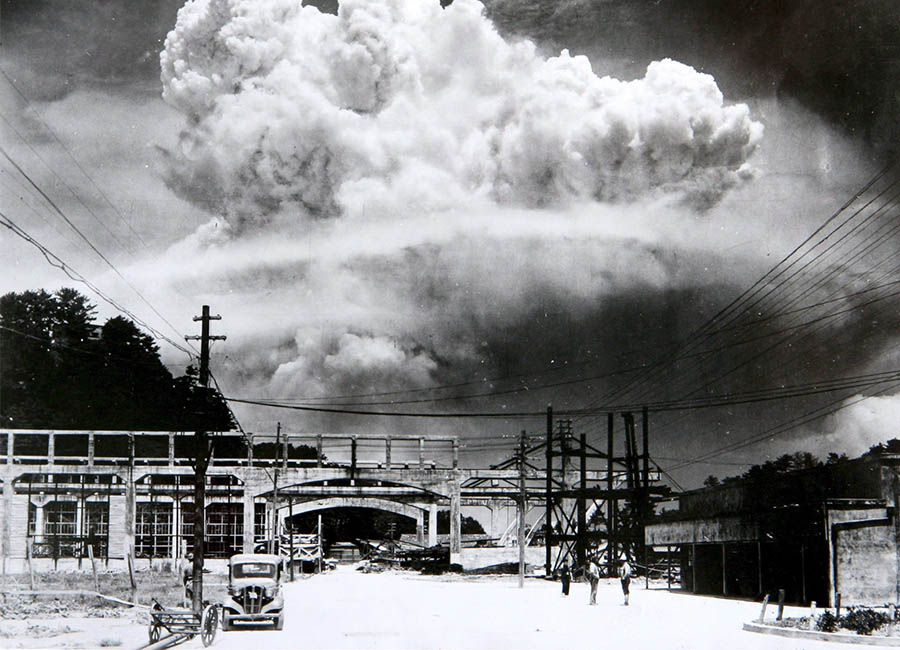 Despite the catastrophic loss of life that it caused, the atomic bomb that was dropped by the United States on the Japanese city of Nagasaki on 9 August 1945 made for some truly memorable photography. The twin bombings of Nagasaki and Hiroshima during World War Two, which cost the lives of at least 129,000 people, are still the only use of nuclear weapons in the history of warfare.

Nothing quite captures the imagination like a photo from the far reaches of outer space. Taken by NASA's Mars Exploration Rover Spirit on 19 May 2005, this mesmerizing image shows the sun setting below the rim of the Gusev crater on the 'Red Planet.' And for those of you wondering what time of day it is, NASA says the image was snapped around 18.07 in the evening.

Thanks to the wonders of flight and satellite technology, we tend to take aerial photography for granted nowadays. However, up until 1860, people were still used to seeing everything from ground level. While Gaspard-Félix Tournachon's overhead photo of Paris was the first to be shot from the air, it's no longer in existence, which means the award for the oldest recorded aerial photo currently resides with James Wallace Black. His image of Boston, papped from 2,000ft in a hot-air balloon, is now on display at the Metropolitan Museum of Art in New York.

Ignoring all of the mad conspiracy theories, there can hardly be a more defining moment in human history than mankind's first steps on the moon in July 1969. However, whilst Neil Armstrong was first to descend the lunar module Eagle, before uttering those famous words, he was also the man behind the lens for the majority of photos from the Apollo 11 moonwalks. That's why the most recognized image of the mission features Buzz Aldrin, albeit with Armstrong reflected in his helmet.

Into the Jaws of Death 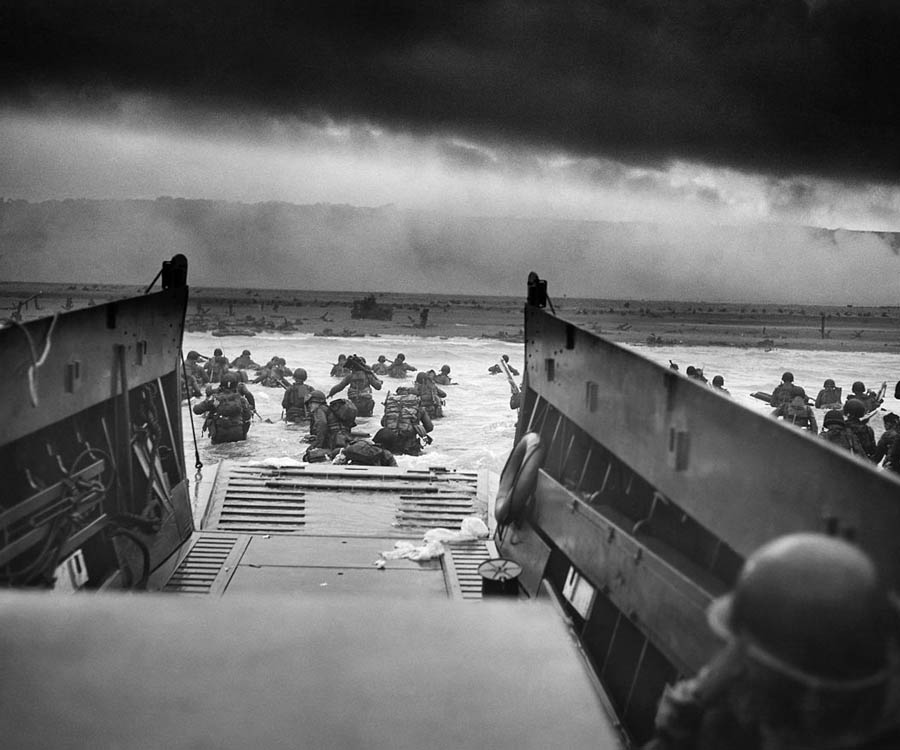 Most people will recognize this scene from Steven Spielberg's Oscar-winning film Saving Private Ryan. However, the scale and horror of D-Day is truly brought to life in this photo. It shows troops from Company E, 16th Infantry, 1st Infantry Division (the Big Red One) as they wade onto Omaha Beach on the first day of the offensive that would ultimately tip World War Two in favour of the allies. 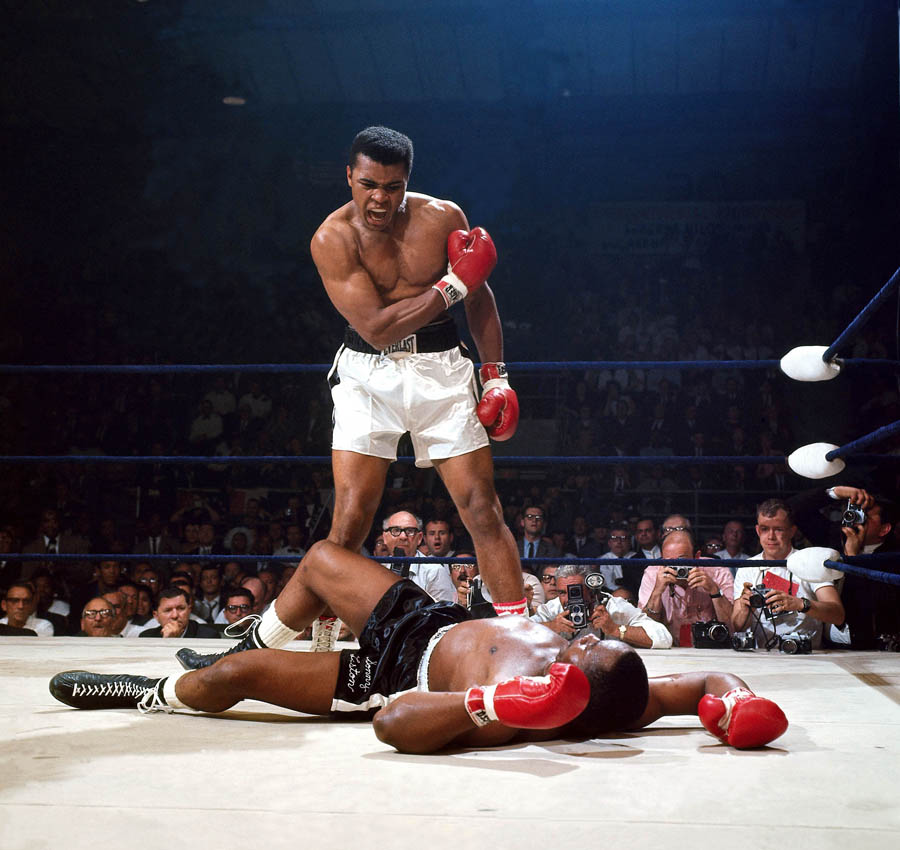 Arguably the most famous sporting photo ever taken, this snap by American photographer Neil Leifer shows the moment that Muhammad Ali stood over the defeated Sonny Liston following their second world title fight on 25 May 1965. The two bouts between the boxers were shrouded in controversy, with many believing that the outcome of both was fixed. It's a debate that continues to this day.

The Battle for Aleppo 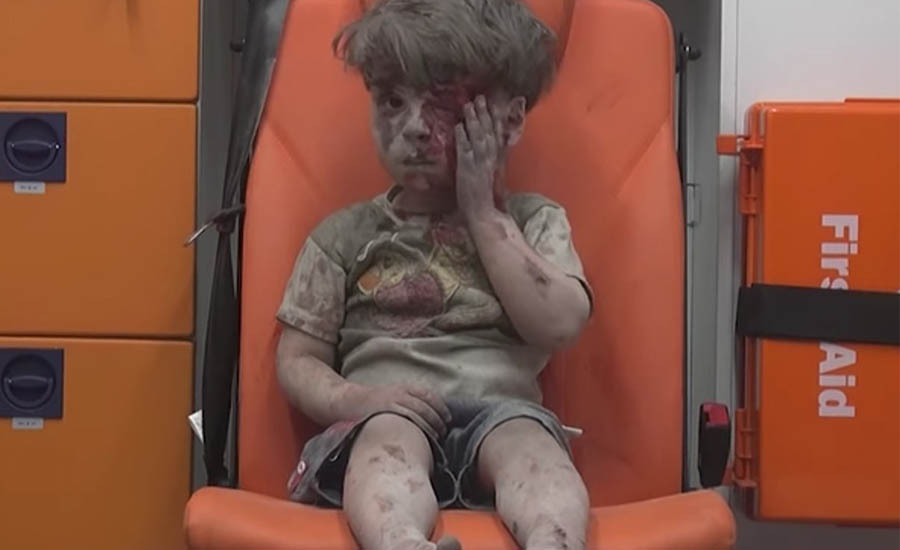 With the death toll of the war in Syria numbering in the hundreds of thousands, an image that hit the press yesterday (18 August 2016) has sent shockwaves around the world. Five-year-old Omran Daqneesh is pictured in the back of an ambulance, covered in dust and blood, as the battle for the city of Aleppo continues to rage around him. The videographer, Mahmoud Raslan, said he passed other lifeless bodies, including some children, before spotting Daqneesh.