The Top 10 Apps for Entrepreneurs

The amount of apps out there can be overwhelming, so we've chosen 10 to save you the legwork.

Being an entrepreneur isn't easy. The never-ending to-do list, the constant meetings, not to mention the endless traveling. We surround ourselves with mentors and colleagues to help us and guide us, but what's the most handy sidearm for any entrepreneur? It's the 'simple' mobile device.

In a generation where we rely on technology so heavily, mobile apps have become tools of the trade for many entrepreneurs. With demand comes supply, and the two main app stores have become less like a tool box, and more like a man-drawer, cluttered with apps which often aren't fit for purpose. Many are broken or are poorly designed.

However, some do stand out as shining examples of how apps should be made – apps that can almost certainly help you in your quest for success. Here is our Top 10:

When I first moved to London a couple of years ago, I spent weeks wandering around like the proverbial rabbit caught in headlights. I had to carry a tube map with me everywhere and my Oyster card suddenly became the most important thing I owned. Transport in London confused the daylights out of me until I was introduced to Citymapper.

The app acts as your guide to London (and many more cities across the world), giving you the best route to your destination, the cost and journey time, as well as keeping you in the loop about delays or travel interruptions. Anyone who knows London, knows how frequently these happen. Citymapper is easy to use and the appealing interface means that you can get the information you need in a hurry, and plan an alternative route to get to that meeting you absolutely can’t miss. It’s how transit apps should be made.

As an entrepreneur, you probably have hundreds of things to do on a weekly basis – from small things like clearing your inbox, to bigger issues such as changing the time of an important meeting. With so many things for your brain to juggle, it’s easy to drop the ball every now and then.

Clear makes it easy for you to see, in a snapshot, all the tasks you’ve got to do, when you’ve got to do them and how much of a priority they are. In a couple of swipes, you can add a task and set a reminder and due date. Once you’ve got your list set up, you can drag and drop each task in order of importance, and the app automatically colour codes them so you can identify your most pressing tasks in an instant. Clear is one the best examples of an app that’s clutter-free, but has enough features to do what you need it to do, making sure you never forget that networking event or essential email.

As a nation obsessed with the weather, it follows logic that weather apps are two-a-penny on the App Store and Google Play these days. The thing with weather apps is that they’re generally either too focused on design (and therefore don’t have enough features) or too focused on the features (and therefore are as difficult to navigate as King’s Cross on the Monday morning rush hour).

Dark Sky, however, hits a nice balance. It’s a beautiful app (you’re probably beginning to realize that I’m pretty obsessed with UI and design) but it also has some incredible features. Rather than tell you what the weather will probably be like over the next week, it focuses on telling you whether you’ll need an umbrella today, or whether it’s worth taking sunglasses. And it’s remarkably accurate. Using state-of-the-art technology it predicts snow or rainfall, right down to the last minute. It’s helped me out more than a few times and is well worth the £2.99 cost. 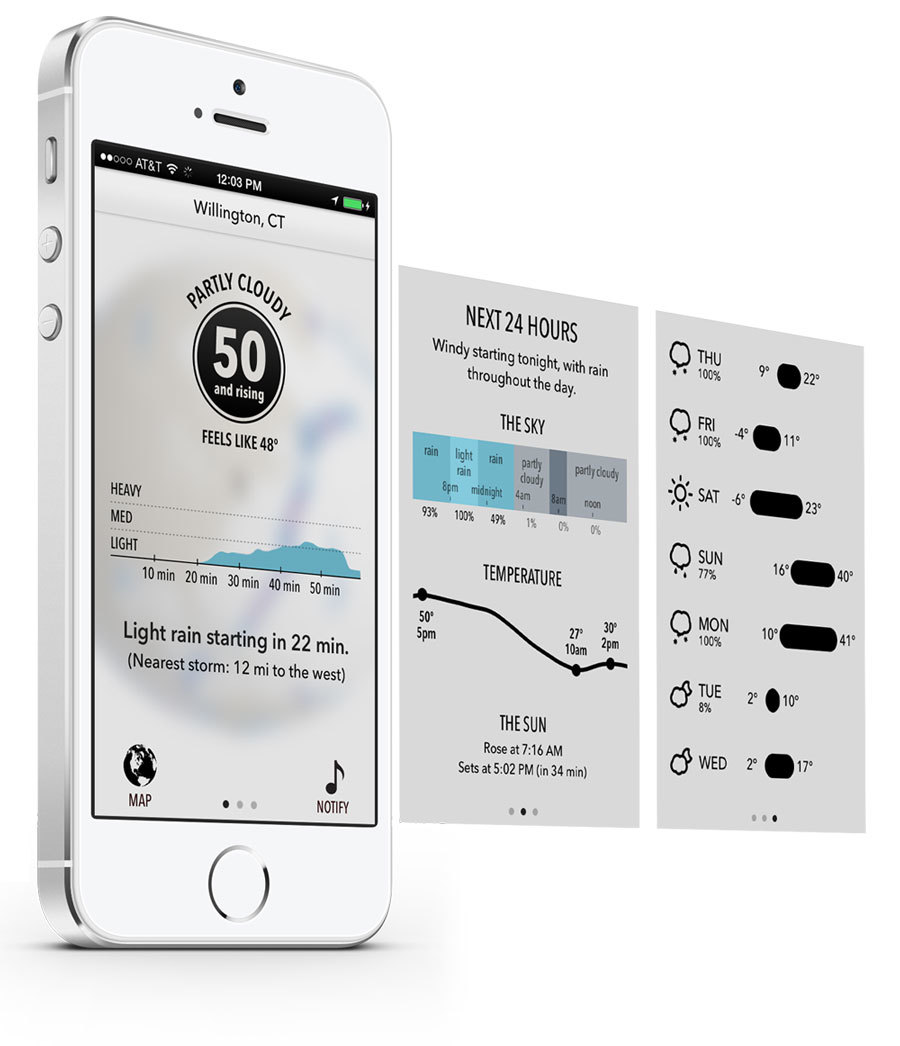 Many see email as a necessary evil. Some have tried to kill it off, and then decided not to. The fact of the matter is that we all use it, and that means it has become a true, multi-platform communication tool. The problem with this, though, is the amount and variety of email apps on the two main app stores. It can be a bit overwhelming.

Mailbox could put an end to all that. The offspring of the hugely successful online storage, sharing and collaboration tool, Dropbox, Mailbox goes straight for the jugular of the habitual enemy of email - the cluttered inbox. With it’s ‘help me get to zero’ button, and swipe-based organisation system, it’s set the trend that many other apps have followed, but, in my opinion, Mailbox is the best. It’s been on my phone since day one, and is always one of the first apps I download when I get a new phone. Simply a must-have for the busy entrepreneur.

In recent articles written by Syrah’s founder Josh Dickson and Eugene Kim of Business Insider, Evernote is in big trouble. As a long-time Evernote user, I’ve recently started to become frustrated with the 'darling of Silicon Valley'. In it’s bid to go public and become a 'hundred-year company’ it’s left behind many of the loyal users it gained when it was a startup, and, more importantly, put to the backburner many of the features that gave it such a committed following. With the announcement of job cuts and office closures many are saying it could become the first ‘dead unicorn’. So, perhaps it's time to find an alternative? Wunderlist is my pick. It’s designed around the use of hashtags (much like Twitter) and it’s comparison to the hugely popular social network doesn’t stop there. But beneath the surface, it's a very well-designed, quick-syncing, handy note-taking application that, like Clear, isn't cluttered with features. It knows what it’s used for, and sticks to it.
6. Sleep Cycle

It’s a well-known fact that running your own business takes its toll on your sleep pattern. From the late night online meetings, to the early morning commutes, the average entrepreneur survives on less than six hours' sleep. Insufficient shut-eye often results in health problems. Enter Sleep Cycle.

Designed to use the Accelerometer on your iPhone, you simply set a period during which you want to be woken up, and place it next to your pillow. The app then monitors movements in your sleep and tracks when you're in deep and light sleep, waking you up at the optimum time. I found my mood improving rapidly and had knock-on benefits such as an increase in my productivity and lowering of stress levels. Well worth anyone’s 99p.

So, you’re browsing through your favourite business website or blog and stumble across an interesting article, but you’re too busy to read it. You bookmark it, but only come across it again 6 months later when it isn’t relevant anymore. Sounds familiar? Well, Instapaper could be the answer to your problems. In a space dominated by the more visual Pocket, Instapaper takes a step back. It cuts down on clutter for a truly distraction-free reading experience. It means you can really focus on the content of the article. With Instapapers note taking functionality, you can also save excerpts that are particularly important a for later date.

8. PocketCasts
Stuck in a loop of listening to same songs on your commute, in the gym, or whilst in deep work mode? Try PocketCasts. It’s quite simply the best podcast player I’ve found on any platform, with it’s easy (and reliable) syncing between devices, episode management, tagging system and variable speed playback features. It’s also available on iOS, Android and Windows phone as well as a web player, meaning you don’t have to drain your battery listening to podcasts on your phone. Simply set up PocketCasts with some top picks, and it will notify you when a new episode is available. At £2.99 it costs the same as a supermarket meal deal, but will leave you with endlessly more hours of gratification than a soggy BLT sandwich.
To get you started, here are some of our favourite podcasts right now:
Startup
The Pitch
Design Details
The Reboot Podcast
9. Pacifica
Pacifica is wonderful app for any entrepreneurs suffering from anxiety or stress, which, I can safely say, is a lot. Using proven cognitive behavioural therapy techniques, Pacifica gets to know you and your daily activities, and tells you what might be contributing to your stress, and how to reduce it. By tracking your daily health goals as well as your mood ratings, it delivers you effective deep breathing and progressive muscle relaxation activities to keep your brain healthy. It also has an active community for you to tap into with any questions or advice. It’s also free. Now there’s no reason not to take your stress levels seriously. 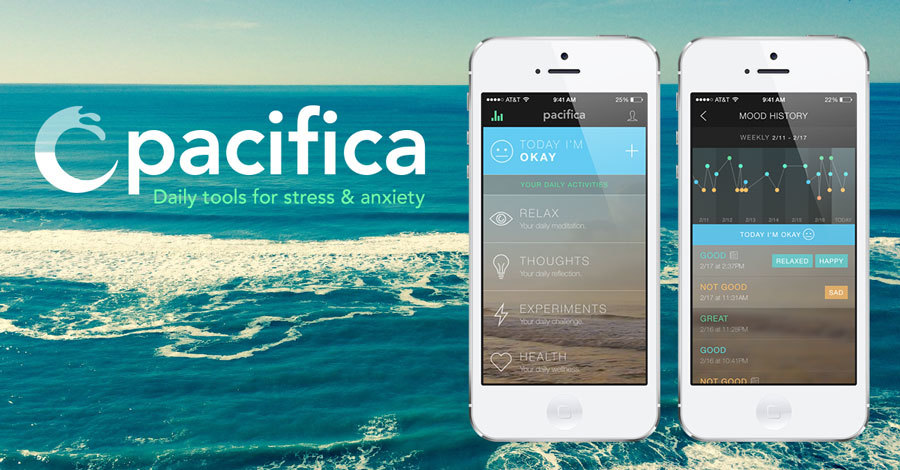